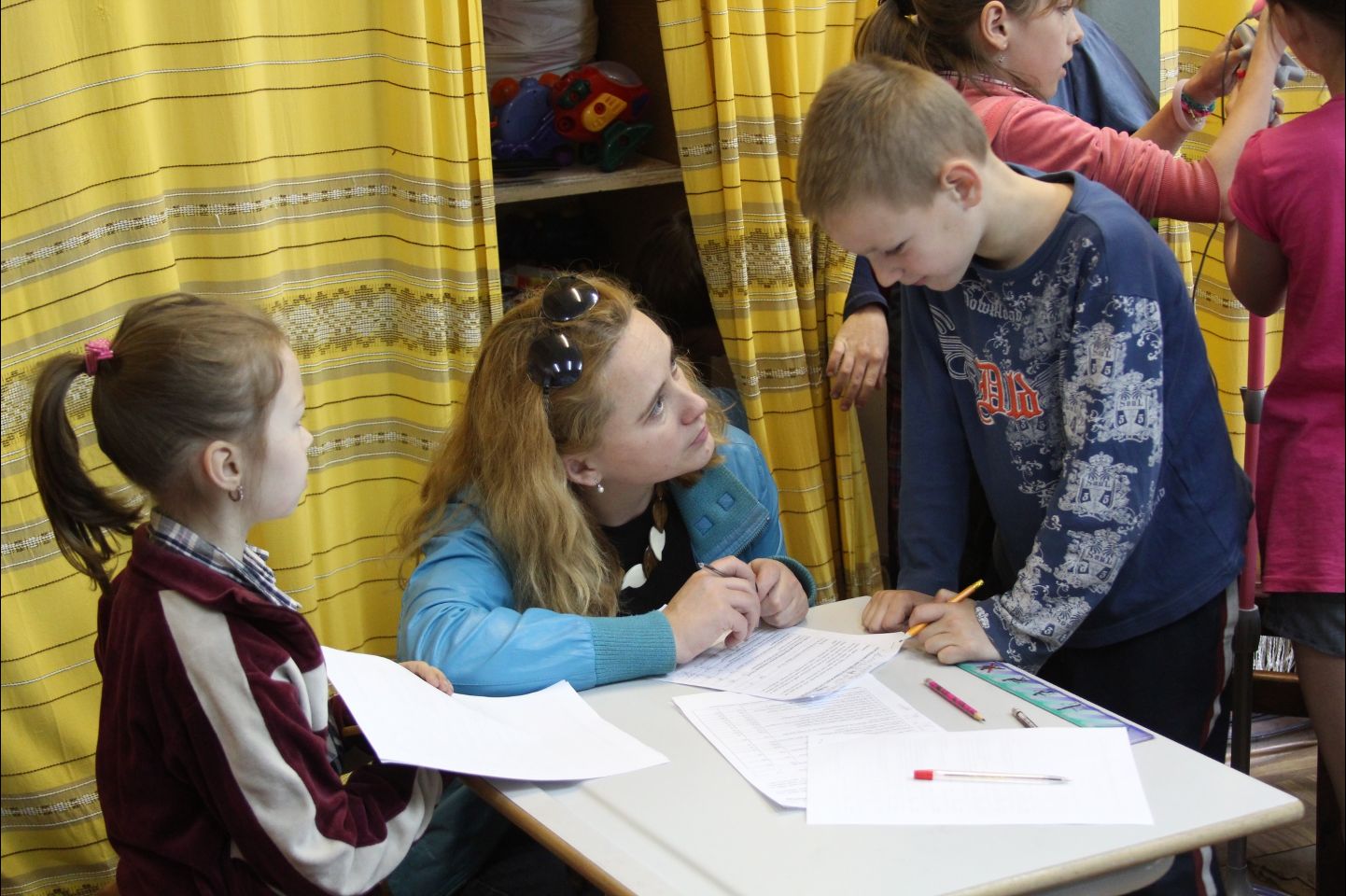 War Trauma – How it Effects Children

During these difficult times, many Ukrainians suffer from military actions in Ukraine. They face the loss of their close ones, loss of their own homes, forced migration, anxiety and worries. These events are especially traumatizing for children. Children witness artillery bombing and shooting, watch the destruction of their native city or village and their own homes. Such experiences can cause different psychological traumas.
Children traumatized by war are easily scared by loud noises, some of them are afraid to go outside the house. Many of them become depressed; they often cry, exhibit anxiety and worry. Others become nervous, inclined to sudden irritation and anger. Many children face problems with sleeping: they wake up in the middle of the night crying and speak of awful nightmares. Thoughts about the past cause such sadness that they try to force out those memories and avoid any reminders of the past events.
The needs for psychological assistance of those who witnessed and survived the events of war are of utmost importance. Particularly, a focus has to be made on children, traumatized by war, since their experiences and skills to deal with stress, depression and panic will directly influence their chances for fulfilling lives.

About the “Helping Hand for Ukraine” Project

The Project aims to improve the socio-emotional and psychological conditions of children with war trauma and their families (IDPs) who witnessed and suffered military actions in Ukraine.

“Children and War: Teaching Recovery Techniques” manual constitutes the methodological basis of the project. It has been developed in frames of cooperation between the Center for Crisis Psychology (Bergen, Norway) and the Institute of Psychiatry (London, Great Britain). In Ukraine, the manual was translated and adapted by the experts from the Ukrainian Institute of Cognitive Behavioural Therapy (Lviv, Ukraine).
The manual is developed based on effective-evidence-based methods of treating children’s post-traumatic stress disorder. It has been used in many countries, including Greece, Turkey, China, Sri Lanka, and Iran following natural disasters and during warfare. It proved to be beneficial for those who attended the sessions, thus the manual is considered to serve as a tool for positive mental health therapy. The manual is designed to be used by people, who are not necessarily very experienced in child mental health issues. Primarily, it is used by teachers, social workers, psychologists after short preliminary training. It is important for the implementation of our project as it allows, in a short period of teaching, trainers in Ukraine to use the manual in their work with children with war trauma.

Maryna is 10 years old. Her family comes from Vuhlehirsk, Donetsk Oblast (province). She does not have a father; he left them before the war started.
War is not an empty word to Maryna. She witnessed a missile hit her neighbour’s house. Maryna and her mother rushed to help as they saw their injured neighbour woman lying unconscious on the kitchen floor. They brought the woman to the hospital.
Totally absorbed in their neighbour’s situation, they could not even realize what was going on; they even did not care about themselves. However, they were struck with the aftereffects of stress that same night: the girl could not fall asleep because of memories of the dreadful bombardment; and her mother was groaning in her sleep. The next morning, Maryna’s mother’s legs were paralyzed.
The bombardments went on. Maryna looked after her mother for a few days until she recovered. The same day, the family went to Kyiv, then to Odesa. The mother had to work a lot; she hardly ever had time to talk to her daughter. Maryna did everything on her own: went to school, did her homework, attended sports classes. Everything looked fine on the outside, an ordinary family, but both of them had their own pain. The mother could not say a word about events she had experienced. It was especially difficult to talk to her daughter Maryna. The girl did not tell her mother she couldn’t fall asleep because every night she heard the missiles exploding in her memories. Tired from insomnia she dozed away, but in her dreams she could still see the bombardments. She became insensitive to everything. She often shuddered at the noises in public buses.
Maryna and her mother took part in the programme “Children and War” in Odesa. The first accomplishment of mother and daughter was that they could cry among the people who experienced the war as well. The second achievement, thanks to different techniques they were taught, they started to cope with their problems. Maryna could sleep better, she was no longer afraid of loud sounds, and her mother took a day off in order to have some rest. The biggest achievement was the day before the last class. Mother and daughter decided to drink tea together in order to look each other in the face and talk, finally! To talk without fear about what they experienced, how they love each other and how they miss their destroyed house.

The donors and partners of the project are:

Ministry of Foreign Affairs of the Republic of Lithuania

The Embassy of Canada in Ukraine

and over 60 more state institutions and nongovernmental organisations.

How You Can Help:

You can donate online:

HOPE worldwide invites you to join in and become our partner to provide humanitarian aid and psychological assistance to children who received war trauma as result of military actions in Ukraine. Let’s unite our efforts to support Ukraine! “I overcame my fears and started thinking about my future…”

Classes with children and their parents on the program “Children and War. Teaching Recovering Techniques” continue to be actively held in different parts of Ukraine and abroad. [...]

There is a metaphor in our project: when we learn techniques for overcoming post-traumatic stress, we seem to fill our imaginary “backpack” with various techniques and tools. With one [...]

Training on the program “Children and War” for psychologists, social workers and volunteers took place in Chernivtsi

On April 5-8, Chernivtsi hosted a training on the program “Children and War. Teaching recovering Techniques” for psychologists, social workers and volunteers. Among the 29 [...]

Across Ukraine and abroad, “wounded” Ukrainians are healing their psychological wounds

Sincere thanks to the psychologists and volunteers, participants of the “Helping Hand for Ukraine” project, who have just completed a five-day training program “Children and [...]

Training on the program “Children and War” took place in Rzhyshchev, Kyiv region

On April 5-7, at the initiative of Christians of the local branch of the Kyiv Church of Christ in the city of Rzhyshchiv, Kyiv region, a training was held under the program “Children and [...]

Another wave of training on working with the program “Children and War. Teaching Recovering Techniques”. Thus, from March 23 to April 3, online trainings were held for 100 new [...]

Today, during the war in Ukraine, children and adults from different cities of our country began to study self-help techniques under the program “Children and War. Teaching Recovering [...]

Training on the Program “Children and War” Took Place in Boryslav, Lviv Region

On March 23-25, within the framework of the “Helping Hand for Ukraine” project, a training on the program “Children and War. Teaching Recovering techniques” took place. [...]

On March 16-20, the second online training on the program “Children and War. Teaching Recovering Techniques” took place within the framework of the project “Helping Hand for [...]

PROJECTS FOR THE ELDERLY

- We be of one blood

We're not around right now. But you can send us an email and we'll get back to you, asap.